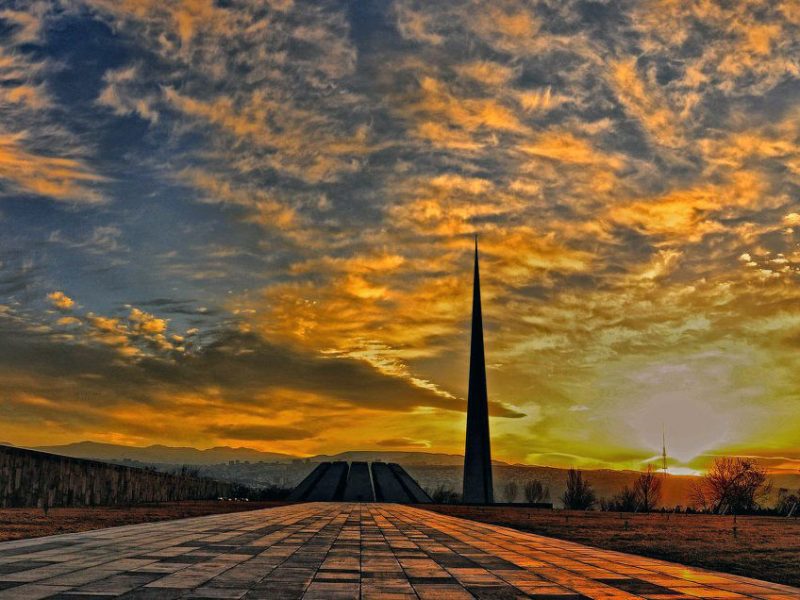 The 1960s are known in the life of Armenian people as a period of revival,, consolidation, evaluation of the past.  In 1965 on the event  of the 50th anniversary of Armenian Genocide protest meetings had been holding in Diaspora, the participants of which stressed the importance of building a memorial dedicated to remembrance of the victims of the Genocide.

The First Secretary of the Central Committee of the Communist Party of Armenia Yakov Zarobyan had a significant role in the construction of Tsitsernakaberd Memorial.

In 1964 a group of the intellectuals from Armenia wrote a letter to the central Committee of the Armenian Communist Party with a request to permit a monument dedicated to the victims of Great Genocide. After long applications and requests in 1965 the ASSR Council of Ministers finally made a decision on building the memorial.  On April 1 of the same year a competition was announced for the best project of the monument and the Armenian architects from Diaspora could also participate in it. In the end of the competition about 70 projects were presented. According to the organizers of the competition, the memorial  was to embody the life of Armenian people full of struggle, their viability, the present and the future.

The project code-named "ASSR flag" was chosen by voting INSERT INTO `arm_static` VALUES (authors Sashur Kalashyan, Arthur Tarkhanyan). The place was chosen by the authors. The memorial was built in 1965-1967, the expenditures made up 400 000 roubles. The solemn opening took place on November 29 1967, on the 47th anniversary of the Soviet Armenia.

The "Reviving Armenia” memorial column has a form of an arrow and raises 40 m high. It is divided into two parts, a big one and a small one symbolizing continuance of life, the idea of nation’s revival. According to the authors, the memorial column is a sprout of plant which has torn the cover of pain and got out symbolizing the will to live.
The temple of eternity is built with 12 huge basalt struts bending to the center. The figure 12 is chosen following the geometrical rules. Unusual high stairs lead inside the temple to the fire of eternity, making the visitors to bow down to the memory of the victims of Genocide.

Mourning music by Komitas, M. Yekmalyan always sounds from inside the memorial being in harmony with the fire of eternity. The fire symbolizes the idea of never healing wound, of eternal smoke.