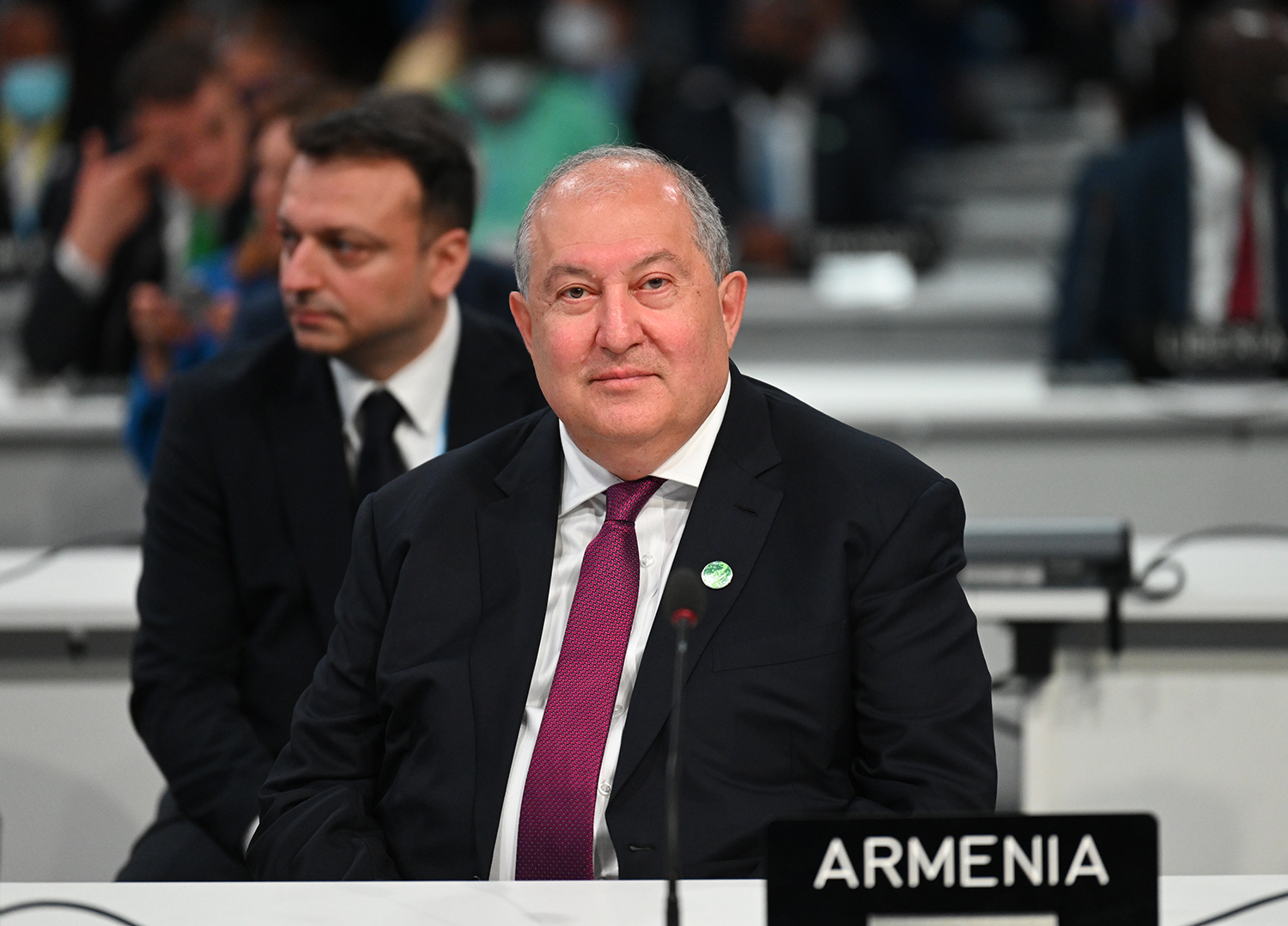 I would like to thank Her Majesty and Her Majesty’s Government for organizing this significant and timely event.

Special thanks to Prime Minister Boris Johnson, his colleagues and the City of Glasgow for an excellent summit and warm hospitality.

First about Armenia - a small state but a global nation.

According to the World Bank analysis, Armenia is the 4th most vulnerable country to climate change in the Eastern Europe and Central Asia region. Armenia has registered a 1.3-degree Celsius increase in temperature, and a 9 per cent decrease in precipitation.

Despite the challenges by the COVID-19 pandemic and ongoing Nagorno-Karabakh conflict, we are committed to a stronger integration into the global agenda on climate change and to demonstrate an increase in our climate ambition.

Armenia has consistently expressed its commitment to joining global efforts to combat climate change. In 2021 Armenia reaffirmed our commitment through the Nationally Determined Contributions and declared an objective of 40 per cent reduction of its greenhouse gas emissions by 2030, compared to the 1990 levels.

The long-term objective of Armenia is to achieve climate neutrality in the second half of this century.

Transition to climate neutrality is at the core of the country’s energy independence, energy security and green growth policies.

Our vision of resilient and low-carbon growth is directly connected to a solid and effective adaptation strategy based on an ecosystem approach, reforestation, investments in renewable energy and energy efficiency, new high technologies, promotion of electric mobility and further development of nuclear energy.
Dear colleagues,

In this regard, a creative approach is crucial. I am delighted to share with you our renewed "Debt-for-Climate Swap” Initiative. It presents a new climate finance instrument. And it will help developing countries to adapt more efficiently to climate change finance, provides new economic opportunities.

Exactly one year ago during its war against Nagorno-Karabakh Azerbaijan used internationally banned weapons to target not only civilians but also beautiful forests of the large area, causing massive forest fires and creating environmental disasters in place. We call on international community to step up its efforts to prevent such irresponsible, inhumane behavior.

The environmental challenges do not recognize borders and conflict lines, and we should bring all states of the world into comprehensive cooperation.

Now just a couple of words about this conference.

I thoroughly enjoyed the opening of the conference, enjoyed the speeches of my colleagues from worldwide. And it was confirmed by everybody here, that there’s a big problem which is the climate change. But that’s not the only problem that we have these days, because we are facing also pandemic, we are facing economic difficulties worldwide, we are facing rise of populism, we are facing uncertainty, we are also facing unpredictability here.

By having all of these problems, we have also recognized here globally that there’s huge wealth and that wealth is in trillions of dollars that could resolve the issue. And on the other side during the hundred years of development based on quantum technology and quantum physics, we have achieved phenomenal achievements in science and technology, and that technology today can resolve our problems be that in climate changes, be that in Covid and other problems that we are facing.

So where is the problem? Why are not we so effective or efficient? I think that there’s one thing that we should learn from the history of science when 100 years ago great scientists, people like Albert Einstein, Max Planck, Heisenberg, realized that the classical laws of physics and mechanics cannot be applied to the new discovered small particles and atoms. You have to change your mentality, you have to change your philosophy, your logic, even your common sense to understand and create the theory of quantum physics.

We are on the crossroad. The world has become quantum. This is a crossroad that we have to start thinking differently because the world that’s ahead of us, is not the one that was there 10 or 20 years ago. If we change our mentality and form our ambition and strategy, then we can effectively use the finances and the wealth that the world created during this phenomenal development and use the technology to handle the problems that we are facing. But not only to resolve the problems but also to create the basis of development to the brighter future years to come.

At the opening of this Summit Professor Brian Cox took us to a trip to Cosmos to see from the above how amazingly beautiful this Planet is and to realize that in the whole Universe this is our Home and the Only One and there is no other alternative for us but to work and to fight for this Green and Blue Planet.

Armenia is committed to become a really Smart State, devoted to our Nature, Planet and Humanity. And I’m optimistic that we can overcome these difficulties and build a brighter future for all of us. 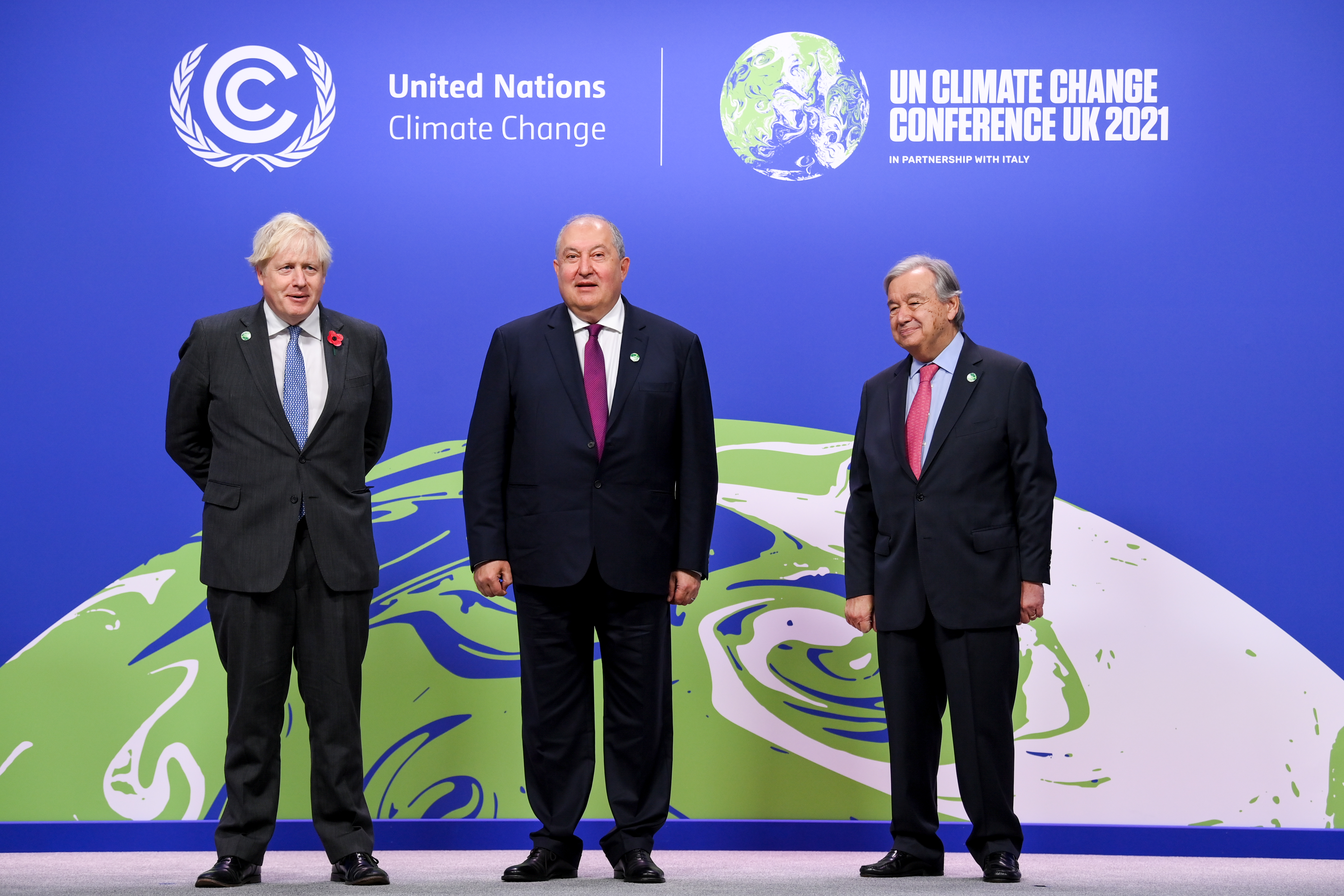 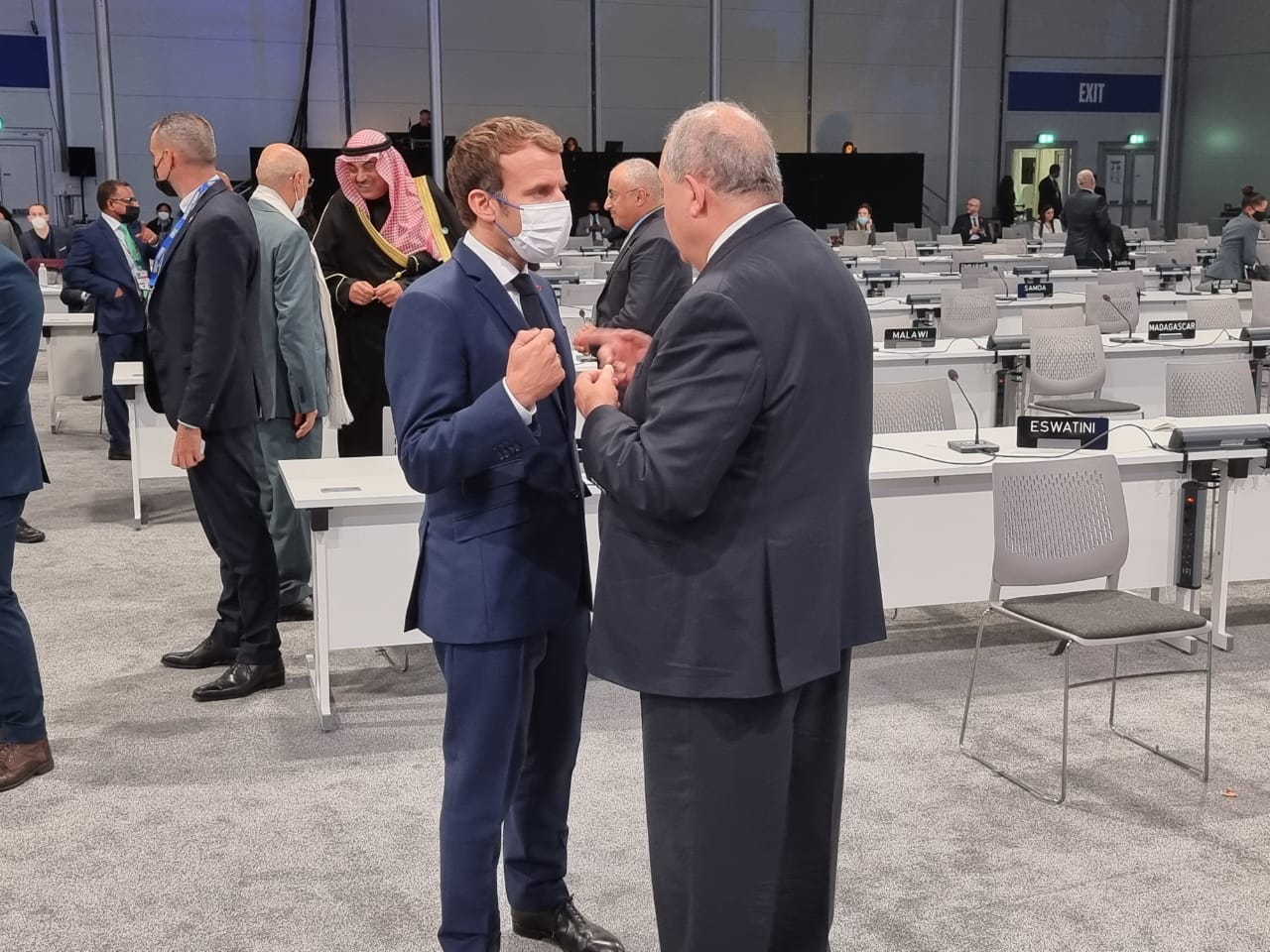 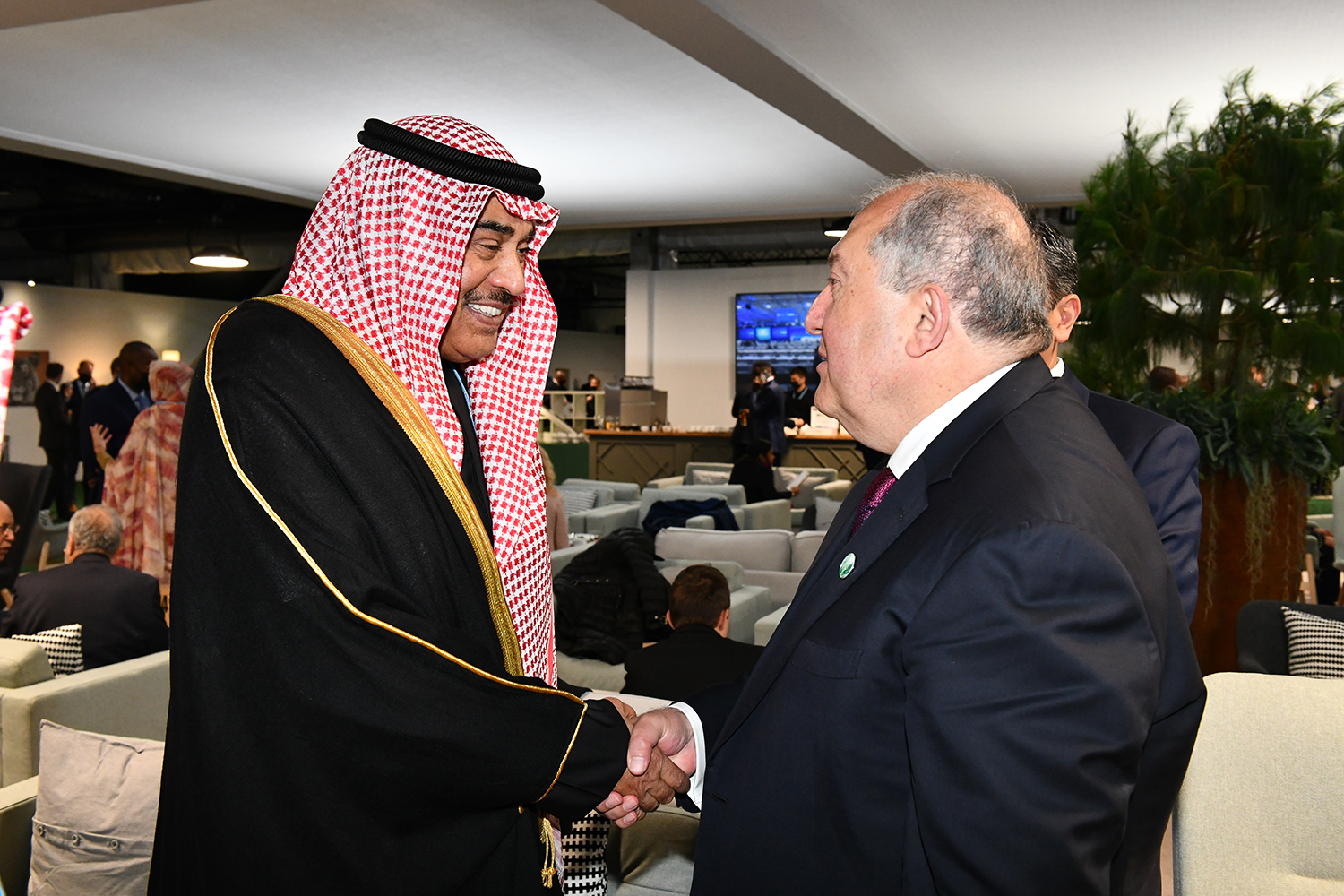 
Կարդացեք նաև:
» Speech of Prime Minister of Armenia at the General Debate of the 76th Session of the UN General Assembly
» Armenia celebrates 30 years of independence
» Emmanuel Macron's message to Armen Sarkissian on the occasion of Independence Day
» President Armen Sarkissian’s Address on Armenia's Independence Day
» President Raisi congratulates Armenia on National Day
» Prime Minister Nikol Pashinyan receives congratulations on Independence Day
» We look forward to continuing to support the Armenian people on their democratic journey - Joseph Biden congratulates Nikol Pashinyan
» The volume of capital expenditures in 2022 will be unprecedented. Prime Minister Pashinyan participated in the opening ceremony of the Armenian Business Forum
» Armenia interested in opening communications – PM Pashinyan receives Deputy Prime Minister of Russia
» President of the Republic of Armenia
» Dialogue and overcoming atmosphere of hostility – Pashinyan speaks about new era of peaceful development at CSTO session |armenpress.am|
» Armenia interested in effectively curbing the threat of terrorism in the CSTO and SCO regions. Prime Minister Pashinyan
» Armenian and French Foreign Ministers touched upon the Nagorno-Karabakh conflict, emphasizing the need of resuming the peace process within the framework of the OSCE Minsk Group Co-Chairmanship
» Cultural diplomacy as a driver of Armenia’s economy
» Year of crises