﻿ The volume of capital expenditures in 2022 will be unprecedented. Prime Minister Pashinyan participated in the opening ceremony of the Armenian Business Forum
Ներբեռնվում է. Խնդրում ենք, սպասել...

The volume of capital expenditures in 2022 will be unprecedented. Prime Minister Pashinyan participated in the opening ceremony of the Armenian Business Forum 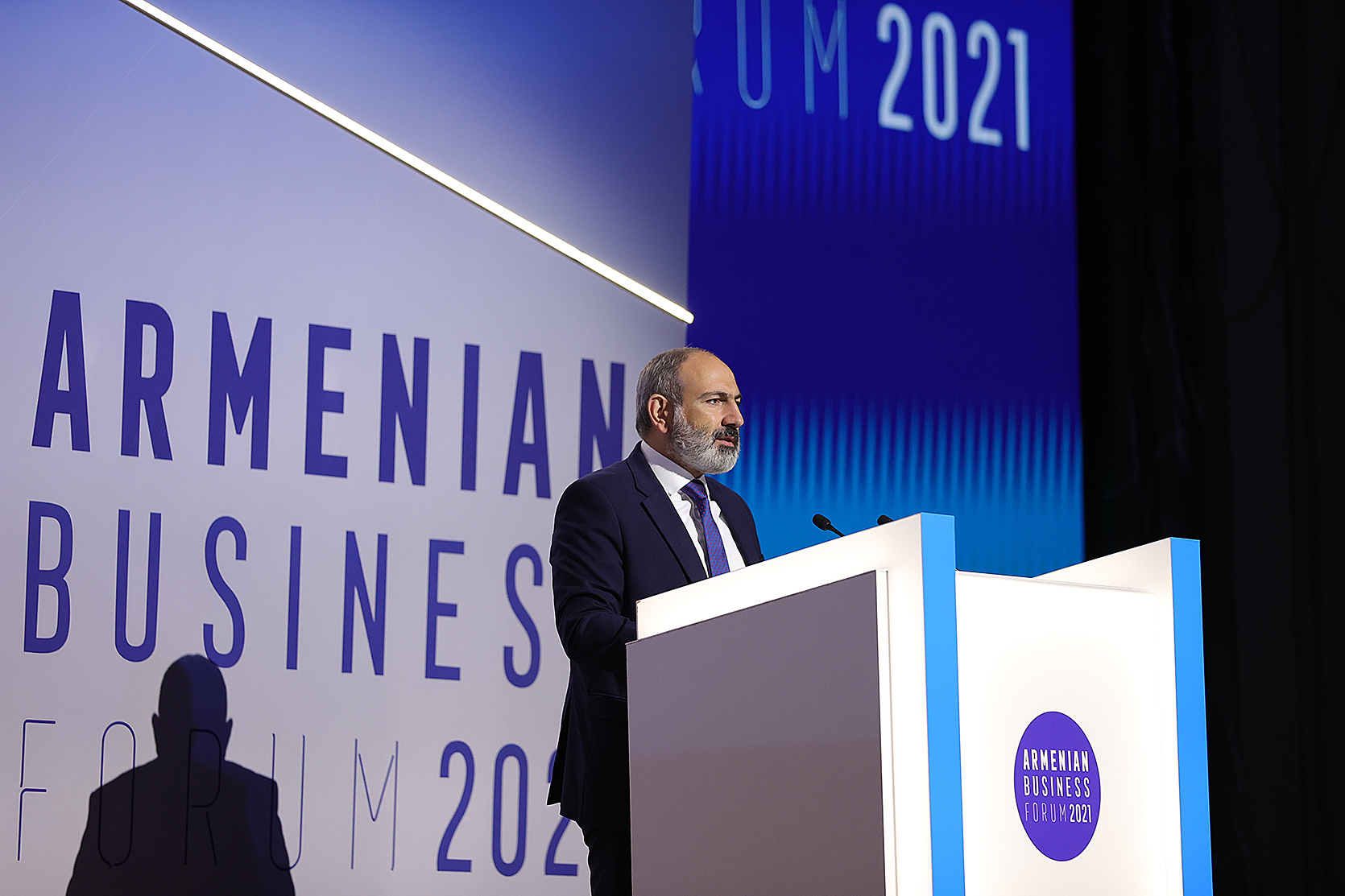 Prime Minister Nikol Pashinyan took part in the opening ceremony of the Armenian Business Forum in Yerevan, organized by the Association of Armenian Businessmen (AAB) with the support of the Tashir Group of Companies.

The event was also attended by the Government representatives of Armenia and Russia, including Deputy Prime Minister of Russia Aleksey Overchuk, as well as numerous businessmen doing business in Armenia and Russia. Prime Minister Pashinyan, Russian Deputy PM Aleksey Overchuk and President of Tashir Group of Companies Samvel Karapetyan delivered welcoming remarks. Samvel Karapetyan presented the investment projects planned to be carried out in Armenia during the upcoming 5 years by the Tashir Group, amounting hundreds of million USD.

Prime Minister Nikol Pashinyan saluted the holding of the Armenian Business Forum in Armenia, which will become a traditional event. According to the PM, this forum is an important message, because the Republic of Armenia and the entire Armenian people have passed through ordeals.

‘’Today’s forum is the brilliant expression of that the Armenians of Russia and the Armenian business firmly stood and continues standing with the Armenian statehood, the Republic of Armenia. Today, this message is very important in the historical landmark we are in.

Indeed, we have passed and still are passing through a very severe ordeal. After the 44-day war in 2020, it was very important to find answers to some important questions. And it was for finding the answer to those questions that early parliamentary elections took place in the Republic of Armenia. Those elections were supposed to show or become the causal link between different events in the 30-year history of the Third Republic and, in the end, they had to answer another very important question: how to continue life and which direction to move?

I think this is the most important issue. As a result of the elections, in fact, the decision of the citizens of the Republic of Armenia to move in the direction of opening the era of peaceful development for the Republic of Armenia and for the region was recorded. Our Government received particularly this mandate from the citizens of Armenia. And in general, is the practical implementation of this theoretical thesis possible?’’, Nikol Pashinyan said, adding that it’s necessary to understand also all the sceptics. According to the PM, in all probability, there are forces that try to demonstrate that the era of peaceful development in our region is impossible.

‘’However, the Government, clearly realizing how difficult challenge it is facing, will be consistent in lead the Republic of Armenia in this way. I have state in numerous occasions that on this path we need strong nerves, composure, prudence. And in this context I have to underline the tools through which we, in our opinion, the era of peaceful development will be established or opened. I consider the opening of regional communications extremely important, according to the trilateral declaration of November 9, 2020 and the trilateral statement January 11, 2021. I think that the solution to this problem is very important also in the context of our discussion, because the opening of regional communications should finally give Armenia an opportunity to overcome the 30-year blockade, which means a significant change in the investment climate in Armenia, and transformation in Armenia's economic structure, so that the country and the state becomes more resilient and competitive’’, the Head of the Government said.

Nikol Pashinyan noted that they talked many times about the political agendas of regional developments. We greatly appreciate the support from our strategic ally, the Russian Federation, in moving forward that agenda, delimitation and demarcation of borders and restoration of the peace process. I have to emphasize that we realize and record that the constructive position of Russia, which we can see today, is extremely importabt for solving these issues’’, the Prime Minister said.

In terms of shaping the future of Armenia, Nikol Pashinyan referred to the projects that the Government has already launched. "We consider the reforms in the field of education to be extremely important for solving our problems, one of the key goals of which should be the quality and access to education. In this regard, the Government of the Republic of Armenia has undertaken a program to build or renovate 300 schools in the next 5 years. About 500 kindergartens or preschools will be built and renovated, with the aim of making education more accessible to all children in Armenia, giving them the opportunity for further professional and higher education so that they can find job in highest-paying market segments.

Infrastructure development is extremely important for us. In this regard, we plan to start or complete the construction of 15 reservoirs in the next 5 years. We have to repair or overhaul at least 500 kilometers of roads each year, and we do this calculation exckuding the implementation of the North-South program, subvention programs. We are already going to launch the construction of the Sisian-Agarak section of the North-South highway, and all this is a state, public investment program worth several billions, for the implementation of which we need the support of our businessmen, including the Association of Armenian Businessmen. Because our evaluations show that the construction capacity in Armenia is not enough for implementing this ambitious project put forward by the Government’’, the PM said, hoping that the launch of the state programs will receive a respond among the members of the Association of Armenian Businessmen, who, inspired by such scale and volume of state investments, will also support the Government with private investments, so that we can get a synergy effect as a result.

‘’We are discussing the state budget for 2022. The share, size and volume of capital expenditures will be unprecedented for the history of our Republic. But traditionally we have a problem, and it exists throughout our 30-year history. We traditionally have the problem of underperformance of capital expenditures, which is connected with the problem I mentioned, because the construction companies operating in Armenia are not able to fully implement the programs offered by the state in terms of their capacities, time and quality. And saluting the Armenian Business Forum, I especially want to praise the mood in which it started, and the mood is more than work-oriented," said Nikol Pashinyan, adding that the Government's goal is to transform the formulation "post-war recovery process" into the start of an era of peaceful development for the Republic of Armenia and the region. "In order to reach this goal, we need the support of all those present here, we need the support of our Diaspora businessmen, the support of our international partners and allies. And I think that this respectable event today is a possible start to turn this mood into a practical reality", Prime Minister Pashinyan concluded.

The main goals of the forum are to restart Armenia's investment and economic potential through investment flows, to establish closer economic cooperation with businessmen from different countries, first of all Russia, to promote youth entrepreneurship, as well as to establish a new level of dialogue and unification of the Armenian business community all over the world. The number of participants of the forum reaches 500.